Does the Bible Really Say…that Baptism Should be Withheld from Some People? 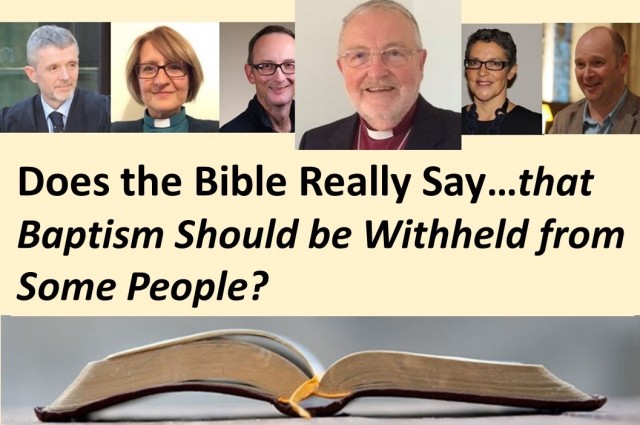 Sadly, there are often stories one hears of the Church excluding people, but this is especially sad when it comes to baptism – the entry door where we welcome people into God’s family.

One baptized gay friend of mine told me how his parish priest had agreed – with great reluctance – that he could be a godparent for his sister’s new baby boy. However, he would not be allowed to stand around the font with the rest of his family and friends – he must stand on his own at the far corner of the church!  At about the same time as he told me his experience – in June of last year – the Presbyterian Church in Ireland passed a resolution declaring that same-sex couples could not receive communion nor could their children be baptised.

Thankfully, there is another side to this story of exclusion, and many of us in increasing numbers agree with the response of the Corrymeela community to the position of the Church out of which it grew:

“Lesbian, Gay, Bisexual and Transgender people – whether single or in relationships; with our families; with our friends; with our faith, doubts, experiences and insights —- are a gift of God to our society.

Corrymeela began in the Presbyterian Church in Ireland. We are now joyfully an open ecumenical community with 170 members … these decisions deny and demean those who have already suffered enough at the hands of society and Christianity…

We assert: You are dignified, welcome and safe. Your faith, families and relationships are honoured. We say this not in spite of our own belief in faith and reconciliation but because of it.”

Turning to the Church of England, (which is my main focus in this article) its website strikes a fully welcoming note in reference to baptism. It tells enquirers who are looking for basic information on what the church is about:

“The Church of England welcomes all babies, children and families for christenings – whatever shape that family takes. You do not have to be married or to have been a regular churchgoer – as a parent, you do not even have to have been baptised yourself – though you could be. Everyone is welcome at their local church.”

Among other gestures of open-hearted welcome, this clearly says, ‘Yes’ to gay and lesbian people who are parents. There is something deep in the DNA of Christian faith that impels us to receive and welcome all who come to us – our first instinct is naturally to want to extend the loving welcome of God in Christ. Of course, in the baptism service itself, the godparents or the adult candidates will go on to make a profession of faith but this follows on from the wholehearted and sincere welcome which has first been extended – the kind of welcome that Jesus demonstrated when the disciples were minded to be exclusionary in their approach.  Then little children were being brought to him in order that he might lay hands on them and pray. The disciples spoke sternly to those who brought them; but Jesus said, “Let the little children come to me, and do not stop them; for it is to such as these that the kingdom of heaven belongs.” (Matthew 13f)

And, speaking personally I was delighted when a gay friend of mine asked me to become a godparent to his adopted child – he is one of the best dads I know!

This declared pastoral approach in the Church of England (as in other denominations) reflects the outcome of the quick thinking which no doubt Philip had to do when the Ethiopian Eunuch made his request for baptism– ‘Look, here is water! What is to prevent me from being baptized?’ In this case, as the enquirer was both a eunuch and a Gentile he did not fulfill the usual requirements to which Philip was accustomed. Many would have excluded him from full involvement in the worshiping community. In Philip’s eyes, following Jesus’ example, the Ethiopian’s difference was no bar to full inclusion. (Acts 8.26-40)

In support of this approach, the Church of England’s Canon B22, Of the Baptism of Infants, explains the duty of every parish priest: ‘No minister shall refuse or, save for the purpose of preparing or instructing the parents or guardians or godparents, delay to baptise any infant within his cure that is brought to the church to be baptized …’ Other churches may feel free to make exclusions for LGBT people or parents but ministers in the Church of England are instructed to welcome all to the baptismal font.

However, this welcoming attitude is not reflected in every local Church of England.  The website of one says to enquirers: “Again, because the child is to be baptised into the church family, any children baptised need their parents to be regular members. Our policy is not to baptise the children of unmarried parents.”

This is clearly not the approach of most parish churches, but some are still hesitant, unlike Philip, when confronted with a ‘new kind of enquiry.’ Hesitation can so easily lead to rejection.

Happily, as this next story shows, when one priest said NO, the priest in a neighbouring parish was totally positive and welcoming in his response. This is how he recounted the story to me:

‘When I received a call, I could tell that the caller was quite hesitant and nervous. I heard a voice ask if she could have her daughter christened at my church. I said Yes that would be lovely and we’d love to do that. It was then she said, “Is it ok as we are two mums? We went to another church and they were difficult. It’s ok if not.”’

I said we would love to christen your daughter and I look forward to meeting you all soon. The sense of delight when we all met was wonderful. It was sad to hear the rejection they experienced when approaching other churches.

It was a delight when two years later I received another call from the same couple to say they would like to have another christening – even though they’d moved. They wanted to come back because they had felt so loved and had received an amazing welcome. When the church (and therefore to many God) has been felt to say a big No, it’s really wonderful to see the joy of a big Yes – and the beauty of God’s welcome and inclusive love in action.  Both services were a real joy to all the family and friends – but also to our congregation too.’

Such stories of welcome and celebration for the children of same sex parents are a clear outworking of the official pastoral and legal position in the Church of England.

However, there are those who wish to exclude LGBTQ+ individuals, families and their children in different ways. For some this may be because they are unclear about how to deal with the relatively new situation of civil partnerships and equal marriage. For instance, a few years ago, a priest in the south of England made the national press when he said that he was unable to cope with the request of a lesbian couple to have their child baptized because there were no appropriate columns in the baptism register for two mothers.  He suggested that one should be named ‘mother’, the other one, ‘godmother’ – a suggestion that they naturally found totally unacceptable.

Fortunately, the church lawyers have subsequently made the position quite clear. The Legal Advisory Commission of the General Synod issued their opinion in 2017:

“where persons of the same sex share parental responsibility their names should both be inserted in the same gender specific column, namely Father’s name or Mother’s name.”

If there are growing pains in how to deal with the children of same sex parents – though by now it should be fairly clear what to do in the Church of England – for some this is a more acutely theological issue when one or both within a same sex marriage ask for baptism.

For those of us who accept the inclusivity of marriage this presents no problems but allows us to rejoice with the couple in their new found faith and welcome them fully into membership of the Church. For those, however, who consider such relationships unacceptable, they may well feel constrained to refuse baptism. The legal position in such a case would be for the couple to appeal to the bishop who is likely to suggest that some other priest who is willing should be asked to conduct the baptism.

However, most churches will hopefully continue to see baptism as the sacrament of welcome, mindful of the bishops’ guidelines which state:

“Those same sex couples who choose to marry should be welcomed into the life of the worshiping community and not be subjected to questioning about their lifestyle. Neither they nor any children they care for should be denied access to the sacraments.’ (Pastoral Guidance on Same Sex Marriage 15/02/2014)”

We are clearly not of in the same position as the Presbyterian Church in Ireland which refuses baptism to those in a same sex marriage and to their children. On the other hand it is The United Reform Church, the Episcopal Church in Scotland, and increasingly the Methodist Church in these islands that have been leading the way out of the pastoral confusion and missionary challenges of failing to embrace a fully inclusive and welcoming vision for the whole of humanity.

Meanwhile, the situation in the Church of England is reflected in some words of the Archbishop of Canterbury:  “I find myself deeply torn … On the issue of what, in English law, is called equal marriage … I personally am conservative on this. But I am equally convinced that it may be that I am wrong. I think part of Anglican theology is always an assumption that you need to go on listening. Anglican theological methodology never closes things down.” (ACC 2019)

Many of us are frustrated by the Church of England’s ponderously slow and drawn out process of deciding on full equality for LGBTQ+ people. At times it can seem to many that there is a deliberate policy of delay in facilitating progress towards the eventual acceptance of equal marriage. However, in contrast, there is a clear acceptance that baptism is fully inclusive. Meanwhile we are in the ironic situation where baptism, the foundation sacrament within the Church, is open to all whereas lawfully married same sex couples are barred from both a church marriage and the possibility of ordination.

The hope and prayers of an increasing number from all traditions within the Church – be they catholic, reformed, liberal or evangelical, formal or informal – are focused on full equality for LGBTQ+ people in all sacraments and ordinances from baptism through the whole of life – for themselves, their partners and their ministries.

The Rt Revd David Gillett, former Bishop of Bolton writes: ‘As a Theologian-Pastor, my views, like many other Christians have developed over time since my M.Phil dissertation of 50 years ago explored approaches to sexuality in the bible. Since then I have been a lecturer at St John’s College, Nottingham and Principal of Trinity College Bristol, interspersed with ministry as youth worker, vicar, peace worker, and bishop. My academic/teaching interests are in the areas of Old Testament, World Religions and Spirituality.’

Like Loading...
This entry was posted in Bishop David Gillett, Does the Bible Really Say, Human Sexuality. Bookmark the permalink.

4 Responses to Does the Bible Really Say…that Baptism Should be Withheld from Some People?